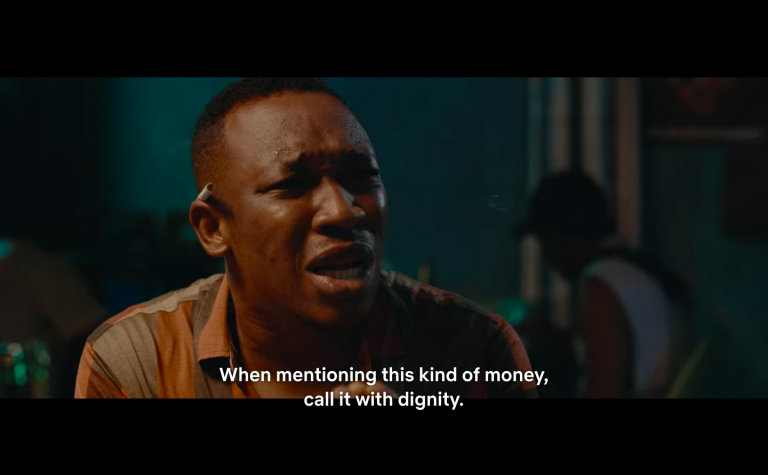 For the Love of Money (Living in Bondage)

In 1996, Mweze Ngangura argued that there was an urgent need ‘not to make films that speak of Africa but films for Africans’ a need for films that were not just militant but that allowed the luxury of entertainment. Living in Bondage speaks to Africans, holding entertainment value for audiences with a very particular (read African) cultural understanding. It doesn’t matter whether we fully subscribe to it or not, we know what it’s about.

In a room full of people who should be interacting, a long shot is used to depict Andy and Ego deeply engrossed in conversation in a corner of the room. He is seen leaning into the conversation while she reclines. He describes money – which has only caused pain in his marriage to Merit – as ‘good’ when speaking with Ego. A medium close-up centres the pair, Ego asks ‘but can you meet my demands?’ A question to which Andy responds in the affirmative. He does not understand the weight of the question, but he will soon come to find out as he has to give up what he loves to gain what he wants – think Thanos on Vormir. His commitment to money costs him more than he would have imagined – his wife and not in an accidental growing part way, it’s a full blown sacrifice her on a juju altar flex. An exaggerated depiction of an age old adage – the love of money is the root of all evil. Watch the full movie here Living in Bondage Part 1.

Kenneth Nnebue’s seminal Nollywood classic Living in Bondage (1992) is considered to have laid the foundations for what we now know as Nollywood. The common tale is of Nnebue, a gritty entrepreneur who came up with the idea of recording and distributing content to help shift a shipment of video cassettes. No matter the events or the motivation, his actions and audience reactions ushered in a new wave of Nigerian filmmaking.

The commercial success of Nigerians films, and the resurgence of classic Nollywood sequels and remakes (thanks to Charles Okpaleke), all started with this one film. Living in Bondage follows Andy Okeke, a regular working class Igbo Nigerian man who goes to extreme lengths to get rich quick. The success of this film and the industry at large whether in English, Yoruba or Igbo provide a sense of themes that have social and cultural resonance for the everyday Nigerians, and everyday Africans.

Check out the trailer for Living in Bondage the Sequel (2019) – you can watch it in full on Netflix.

Did you watch #Livinginbondage back in the days? We are so excited to release the first teaser of Living in Bondage sequel. It is set to hit the cinemas from November 8th! You don’t want to miss this💃
.
.#Livinginbondagesequel #Nollywood #Nollywoodmovies pic.twitter.com/z1zggjXamp

The original Living in Bondage and Nollywood films in general don’t demonstrate the typical combative political character of other postcolonial third cinema works that came out of Africa in the 1990s. Thus these films have often been dismissed for not having much cultural impact beyond its commercial success. However,  we can see Andy’s story as one of transgression and redemption, as inherently political. LIB and subsequent popular films in Nigerian did not lack political character because they were made for the masses, in fact they provided a new way of addressing complicated societal issues through storytelling, and viewing politics through a different lens.

Much has been written on the shaky industrial base that the Nollywood industry emerged from, a politically unstable and economically precarious base that adversely affected the Nigerian population as a whole. Andy’s economic situation at the outset of the film is symptomatic of the position of many Nigerians in 1992, and many Nigerians today. His journey speaks directly to Africans, providing its own answer to seemingly “unexplainable events such as the acquisition of sudden and unexplainable wealth” that Prof Onookome Okome says was common in Lagos at that time. The questions asked of Andy, about how to generate and maintain wealth within the film speak directly to audiences who did not have visibility on, or access to the opportunities that would allow them to elevate themselves economically, but did have shared access media and popular culture like Living in Bondage.

The impact of Living in Bondage shouldn’t be reduced to the overall moralising commentary that warns against the love of money. We can also read Nnebue’s depiction of Okeke’s life as a way to address the problem in which ‘ordinary people tend to be invisible and inaudible’ within African societies (Karin Barber).

In this tale of greed, the women in Andy’s life are filmic devices employed to help the audience form judgements about his character. Andy’s wife Merit serves ‘as the moral anchor’ (Okome 2014: 156), and needs to be seen in contrast to Andy’s overlapping and subsequent romantic interest Ego. For those of us who don’t speak Igbo, the English translation if ‘Ego’ is ‘money’ – enough said.

Through these women and the unfolding storyline, audiences are warned against illegitimately acquiring wealth – a surprisingly suspect practice in popular culture. This warning is repeated loud and clear in Kanayo O Kanayo’s depiction of Chief Omego’s polygamous household. Rather than the peace and joy that is thought to result from economic prosperity, it provides stress, conflict and violence. His illegitimate wealth has allowed him to acquire three wives, and yet he views his first two wives as ‘enemies’, and this leads to fighting between the women. While it’s hard to ‘enjoy’ such a depiction of women, the way they are presented is deliberate, and pointed.

Living In Bondage was created by Nigerian storytellers and business operators for commercial purposes, and for an audience for whom such a lifestyle is a distant possibility, for others, a reality. and therefore easily understood. Karin Barber argues that it is “crucial that we respect and pay attention to [instances of]…conservatism and misogyny [amongst other things, in order] … to understand why and how people collaborate in their own oppression”, even when trying to achieve liberation in another area.

Despite only recently being lifted from the margins of film scholarship, it is important to delve deep into the stories that can be learned about the societies, whether national, continental and diasporic that continue to produce, consume and support Nigeria’s popular film industry.

Even in the earliest stages of the industry, the scenes and techniques chosen were far more sophisticated than the industry was initially given credit for, speaking volumes to audiences, but being dismissed as amateur.

A lot of the things u r trying to learn from Oyinbo films are already in some of your nollywood films...from technique to style to directing. But then again...please ignore me.

Despite heavy criticism for the way in which Africans are represented, the proliferation of the Nigerian film industry throughout the continent and into the diaspora speaks volumes.